The militant wing of the Visualization Brigades recently published its manifesto, shown on the right. The War on PowerPoint is escalating, and at this pace, threatens to overtake the War on Drugs in the near future. What are we to do? Is minimalism the most effective way to convey information, as Tufte preaches? Or is Tufte’s argument backed by nothing but his personal sensibilities, rather than hard evidence? An upcoming CHI 2010 paper (one of the CHI 2010 best paper award winners) argues that elaboration is not all bad (or perhaps that not all elaboration is bad). 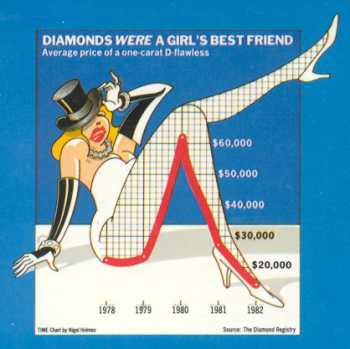 The authors (Scott Bateman, Regan L. Mandryk, Carl Gutwin, Aaron Genest, David McDine, Christopher Brooks) performed an experiment that compared the effectiveness of elaborated vs. simple graphics, and found no significant difference in short-term comprehension, and some advantage for elaborated graphics for longer-term recall. While these results are by no means conclusive (and may depend on the fact that the graphics were created by Nigel Holmes), and it’s still quite possible to design poor charts using either aesthetic, the study does provide some evidence that Tufte isn’t right a priori.

There is, of course, a cultural aspect to this issue as well. Here at FXPAL we regularly receive visitors from Japan who often give talks on various technical and organizational issues. These talks typically involve PowerPoint presentations, as a visual element often helps in communicating complex material, particularly in a foreign language. After  13.5 years of such presentations, I feel justified in making some comparative observations. Whil presentations given by FXPAL people are heavily influenced by Tufte’s design rules, presentations given by visitors from FX are not:

Below is a shot of some slides that have undoubtedly resulted in the premature deaths of several generations of kittens:

Although these slides appear impenetrable to most Western viewers even at their regular (unobfuscated) resolution, there are audiences to whom they make sense. Conversely, I am sure that there people in Japan, who, looking at typical Tufte-esque slides presented by Americans think to themselves: “gee, these slides are intended to be understood by a three-year old. Are they trying to insult us?” Communication is a difficult feat, imperfectly achieved even within cultures. Before we blindly adopt a dogma (any dogma) we should consider more carefully the assumptions that underlie it.