IDEO released a concept video of three ebook-related designs: one (code-named Nelson) for reading and analyzing data, one (Coupland) for managing the social context of reading, and one (Alice) for interactive hypertext fiction. While these themes are certainly relevant to computer-mediated reading, the video breaks little new ground.

END_OF_DOCUMENT_TOKEN_TO_BE_REPLACED

J. Nathan Matias pointed me to Mark Bernstein’s paper (‘paper’ is an inadequate label for the work) on literary criticism and hypertext, which Mark presented at the recent Hypertext 2010 conference. It’s a great piece of writing that ably defends the literary tradition from the Barbarians of mechanical evaluation. My summary of the paper cannot do it justice, what with its 93(!) references, quotes from Pope’s An Essay on Criticism, and Mark’s typical wit (“We cannot make feature films about vertebrate paleontology or test-driven software development; too few people are interested. The same audiences profitably support numerous books.”) The paper has a visual companion in the form of a SlideShare deck; the one aspect that appears not to have been preserved (for posterity and for those with limited travel budgets) is a recording of the actual presentation.

The comment that lead me to the paper seemed to offer it as a counter-example to Andrew Dillon’s thesis about methodological failures of the hypertext community to assess its impact on education. I don’t see it.

END_OF_DOCUMENT_TOKEN_TO_BE_REPLACED

One of the highlights of this year’s Hypertext conference (which I missed) was Andrew Dillon‘s opening keynote. He is a great speaker—the Irish accent doesn’t hurt—and it would have been great to see  it. Perhaps a recording will materialize eventually. In the meantime, there is the written version that reviews the state of Hypertext research 65 years after some of its tenets were articulated by Vannevar Bush in the famous “As We May Think” article in the Atlantic.

END_OF_DOCUMENT_TOKEN_TO_BE_REPLACED

Nick Carr wrote a post a couple of days ago about the distracting effects of hypertext anchors when reading text. He referred to the increased cognitive effort that in-line anchors impose on readers, but as Mark Bernstein points out, the cognitive effort article was published in the 1980s, and these claims were not supported in further hypertext research.

Patricia Wright’s work on cognitive prostheses suggests that hiding information behind links made it less likely that people would use that information compared to showing it directly. Her argument (presented as a keynote address at Hypertext ’91) is that the cognitive overhead of link following makes people less likely to follow links, not that the presence of link anchors is distracting. Of course the implication is that the further from their context you move the anchors, the less likely that people will follow them. This is the point that Daniel Tunkelang makes in his response to Nick’s post.

END_OF_DOCUMENT_TOKEN_TO_BE_REPLACED

A lot of people (like me) will use the iPad as an e-reader, among other things. It’s a good opportunity to play around with what a e-book actually can be, since the iPad offers things that Kindle can’t (color, animation…). I vote for more like this, please:

It’s in the iTunes store here.

Last week Jeremy and I attended the SSM2010 workshop held in conjunction with WSDM2010. In addition to chairing one of the panels, I got an opportunity to demonstrate an interface that I built to browse Twitter search results, to which Daniel alluded in his summary of the workshop. The system is described in a position paper (co-authored with Miles Efron) that has been accepted to the Microblogging workshop held in conjunction with CHI 2010.

The idea behind this interface is that Twitter displays its search results only by date, thereby making it difficult to understand anything about the result set other than what the last few tweets were. But tweets are structurally rich, including such metadata as the identity of the tweeter, possible threaded conversation, mentioned documents, etc. The system we built is an attempt to explore the possibilities of how to bring HCIR techniques to this task.

END_OF_DOCUMENT_TOKEN_TO_BE_REPLACED

Historically, the Hypertext research community is an intertwingling (a Ted Nelson-logism) of three distinct strands — structural computing, interaction, and HT literature, which could be mapped, roughly, onto the engineers, the HCI folk, and the humanists. While engineering and HCI aspects were somewhat necessary for HT literature, the focus, by definition, has been on exploring the boundaries of electronic literature. In the end, I think, it’s good writing that makes hypertext literature interesting much more so than clever interaction. In fact, the electronic component is often not necessary at all: see If On a Winter’s Night a Traveler, for example. 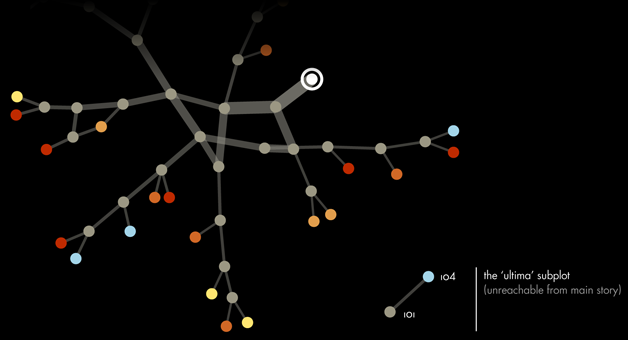 But there is room for beauty in interaction as well. Thanks to Mark Bernstein of Eastgate, I came across a beautiful set of visualizations of narrative structure of CYOA, a series of hypertext books for children. Through a variety of charts and graphs like the one shown here, the author of these diagrams conveys the many alternate paths through a each story in the collection, and uses these visuals to compare, to analyze, and to appreciate the books. And don’t forget the animations, accessible through a link near the top of the page.

My retelling won’t do it justice; take a look for yourself, and think about these designs next time you’re building a slide deck.

Finally, since these stories are now available as Kindle editions, in principle, it would be possible to collect actual reading paths that readers take through the works, and subject them to the same analyses. What sorts of hypotheses about reading, personality, and interaction could we answer with such data?

An e-mail exchange with an old friend caused me to reflect on research in HCIR a decade ago: in the Hypertext conference series there was a lot of churn and innovation around ways to represent structure, about literary hypertext, and about novel interaction techniques that allow people to express information seeking intent in interesting ways. Much of that cottage garden research was swept away by the steam engine of the web, for better of for worse. The demands of scalability led to the abandonment of all sorts of niceties (such as link integrity, for example), including a rich model of interaction. SIGLINK, ACM’s SIG on hypertext, renamed itself SIGWEB in an attempt to stay relevant. The main impact of all that research seemed to be the idea that you could click on blue-underlined text to do something.

END_OF_DOCUMENT_TOKEN_TO_BE_REPLACED

In his Hypertext ’97 keynote address, broadcast from the US to Southampton, UK, Ted Nelson lamented that (for the hypertext community) the Web was like waking up one day and discovering you had a teenage son, who was a juvenile delinquent. There was much concern among hypertext researchers that the web in general (and Tim Berners-Lee in particular) had gotten it all wrong because they had ignored the years of scholarship about how to build hypertext systems.

END_OF_DOCUMENT_TOKEN_TO_BE_REPLACED

Last June, Gary Marchionini hosted a workshop on Information Seeking Support Systems, which I was privileged to attend. The workshop brought together researchers from industry and academia for two days of stimulating discussion about systems, models of information seeking, and evaluation. One of the results of the workshop was a Special Issue of IEEE Computer that Gary and Ryen White edited.

We published a position paper at the workshop, and followed up with an article for the special issue, out today. We look broadly at collaboration in information seeking, including some motivating scenarios of use, a model of the design space, and a short discussion of roles.

This is the same issue that Daniel mentions in his post.

Update: IEEE says they are undergoing a “software changeover”, and expect the TOC to be up early next week.

Update 2: The online copy is now available from IEEE and on our web site.